Our focus at 115 Brewhouse is on brewing “quality, small batch, hand crafted beers”, to match any on the Melbourne craft beer scene. 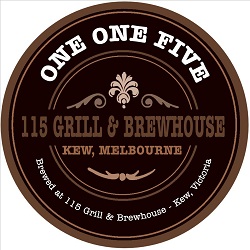 115 Brewhouse is located at Hotel 115 in Kew. Being newly established and building on the growth of Craft Beer in Melbourne and around the world at 115 Brewhouse we pride ourselves in bringing world class craft beer to Melbourne by using only the very best ingredients. At any given time we have 4-5 house brewed beers on tap. Our brewer, Brice, produces nothing but quality ales and largers. With styles ranging from German Weissbier’s to Pale ales and more….

The three vessel 7bbl Brewhouse was specifically designed and built for us in the USA. Our Kew brewery has been carefully engineered being mindful of the restricted area and location of the brewery.

The beer making process begins by using premium Australian and International Barley Malt and Hops. The malt is milled in order to crack but not break the kernels. The grist (milled malt), is then sent to the brewery and added to the Mash Tun with hot water creating a porridge-like substance called mash. We clarify and extract the Wort (sugary water) by circulating the water through the grain bed before we start the transfer to the kettle.

Once in the fermenter yeast is added and the fermentation starts, this is where the wort is converted to beer. Our fermenters are temperature controlled so we can control the reaction of the yeast to generate different beer profiles.

After allowing our beer to condition, we carbonate and send it straight to the taps for your enjoyment!! It won’t take long for you to realise we produce one of Melbourne’s best hand-crafted beers.

If you keep an eye on the ‘What’s On’ page, you will see the latest release dates for each brew to ensure you don’t miss out. A great way to sample the beer is the ‘tasting’ paddle, a sampling of four craft beers.